Back to the Future: Sustainable Design Then and Now 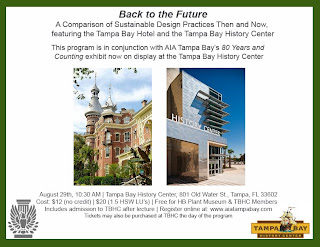 This was the headline from the August 14, 1982 edition of the Tampa Times ('30' is newspaper jargon for the end of a story). The afternoon paper, founded in 1893 and purchased in 1958 by the larger and more successful Tampa Tribune, had printed its last issue. Simple economics drove the decision to cease publication of the Times, but there were larger social changes -- similar to what is going on today -- that doomed the once venerable afternoon paper.
The older Times was not always the weaker of Tampa's two daily newspapers. When radio stations began springing up in the 1920s, it was the Times that secured, in 1922, the ownership rights to WDAE, Florida's first radio station. The Times and WDAE shared resources, even stories, eighty years before "media convergence" would become a standard phrase.
Unfortunately for the Times, their luck did not extend to the 1950s when a new, more powerful medium -- television -- appeared on the scene. The Tribune won the license to operate WFLA-TV in 1955, leaving the Times at a great disadvantage. The very medium that the Times pursued contributed to its ultimate demise. The ever-increasing popularity of television came at the expense of the afternoon newspapers. The cash-strapped Times was purchased by the Tampa Tribune Company in 1958. The two papers continued as competitors, but it became apparent which paper was destined to outlast the other. 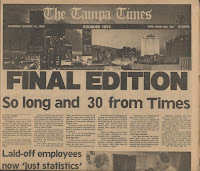 The same forces that drove the Times out of business -- new and faster forms of media, shorter attention spans, greater economic competition -- are at work today. Much like Tampa in the early and mid 20th century, the Tampa Bay area today has two daily newspapers battling each other for limited consumers. TV, the Tribune's early salvation, has now become a major competitor. More importantly, the internet is further eroding readership from all newspapers. The rise of the St. Petersburg Times as a regional newspaper makes one wonder if the area is big enough for two daily papers. The public's increased reliance on the internet further pushes the possibility that, some day in the near future, there may be no more dailies in print at all.
rk-p
Posted by TBHC at 9:52 AM No comments:

Mass Transit In Tampa: Past, Present and Future? 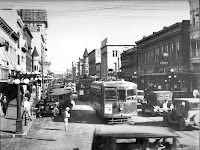 Sixty-seven years ago this week, Tampa Electric Company ended Tampa's electric streetcar service. A popular and efficient method of mass transit that had existed in the city since 1885 came to a halt, replaced by buses and, more importantly, cars.

That the city and county were at the brink of incredible change in 1946 is undeniable. The end of World War II saw millions of people moving to Florida, with Hillsborough County one of the main beneficiaries of this growth. New neighborhoods, mostly outside of Tampa's compact city limits, grew virtually overnight. The idea of mass transit connecting these was almost unheard of. Cars, and new roads to carry them, were the answer. Sprawl wasn't a bad word; it was a new way of life. 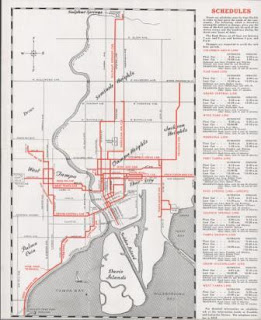 The streetcar system, which connected the old neighborhoods of West Tampa, Ybor City, Hyde Park, Tampa Heights, Seminole Heights, Ballast Point and Port Tampa City to downtown Tampa, was seen as a relic of the past rather than a key part of the future. Tracks were pulled up and inventory was sold off soon after the last car entered the TECO carbarn.

We have changed as a city and as a society in those intervening 63 years. The streetcar system was revived, in a very abbreviated way, in October 2002. The current system connects downtown Tampa and Ybor City, but the new streetcar is more tourist attraction than commuter transport. The time it takes to travel between downtown and Ybor -- about 20 minutes -- is unacceptable to many. Part of the reason it takes so long is that streetcars are not given priority in traffic. Cars still rule the roads.

There has been a lot of talk of late concerning mass transit in Florida, specifically high speed rail crisscrossing the state. If we are going to have efficient mass transit connecting Florida's cities, those cities need to have effective intra-urban transportation connecting business and population centers. Perhaps it is time to look to the past for the answer. We probably cannot return to the streetcar system of yesteryear, but maybe there is something to be learned from a system that carried generations of Tampans to work, play, school, and to their homes, every day for over 60 years. 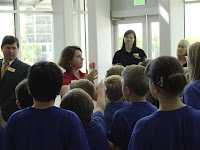 The Tampa Bay History Center is looking for energetic and committed volunteers to serve as tour guides for groups of school children and adults. If you would like to learn about local history and share your knowledge and enthusiasm with others, apply to become a guide at the History Center. By contributing your time, you can learn new skills, work with motivated people who share common interests, and help visitors of all ages connect with the past. Our staff provides ongoing training and education. No experience is necessary—the only prerequisites are enthusiasm, commitment, and a willingness to learn.

Please join us for a new volunteer orientation on September 2, 5:30-6:30 p.m. to find out more about opportunities at the History Center. Seating is limited. Please RSVP at least one week prior to the date. For more information and to RSVP, e-mail historycentervolunteers@gmail.com or call 813-831-2635.
Posted by TBHC at 8:08 AM No comments: