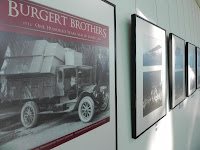 An exhibit featuring Burgert Brother’s calendar photos will be on display at the Tampa Bay History Center’s Annis Children’s Gallery until the end of the year. Featuring photos from this year’s Burgert Brothers Calendar as well as covers from previous years, the exhibit is located in the atrium just outside of the Witt Research Center. It is free and open to the public. 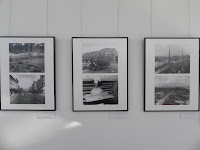 For the past 12 years, the History Center and the Friends of the Library have partnered to produce an annual Burgert Brothers calendar. This year's theme, One Hundred Years in Tampa, features images of business and place from Tampa in 1911.

The 2011 Burgert Brothers calendar can also be purchased from the Tampa Bay History Center store.
Posted by TBHC at 8:58 AM No comments:

On Thanksgiving 1970, the Florida State Seminoles came to Tampa Stadium for a showdown with the Houston Cougars. With a potential bowl berth on the line, would the Seminoles give thanks for their fortune or just deliver a big turkey?

To read more, check out the Tampa Sports History blog, or the November 26 print edition of La Gaceta newspaper.
Posted by TBHC at 6:41 AM No comments:

﻿ ﻿ Long-time Tampa residents will certainly remember, and may have enjoyed dining at, one of the three Ayres Diners located around Tampa. The original Ayres Diner, located at 603 W. Lafayette Street, opened in 1948 and featured a neon sign designed by Tampa’s John Cinchett that boasted the diner was “Always Open.” The diner proved popular among University of Tampa students for its proximity to campus and around-the-clock service, before closing for good in the early 1990s.

Owned and operated by Millard Ayres, the business grew in the 1950s to include locations on South Dale Mabry Highway and Florida Avenue. Built in a prefabricated, “rail-car” style, the diner on Dale Mabry eventually moved to the corner of Himes and Cypress, under new management and a different name, before closing around 2003. The location on Florida Avenue remains open to this day under the name Nicko’s Diner, perhaps best known as the site of a meal eaten by Elvis Presley following his 1956 concert in Tampa. 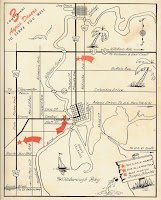 Highlights of this menu include a $2.00 broiled or grilled filet mignon wrapped in bacon, a $1.00 fried shrimp dinner, a 95-cent sliced chicken club sandwich, an 85-cent tender and juicy grilled steak sandwich, a 45-cent cheeseburger and three hot cakes with bacon or sausage for 50 cents. Assuming this menu was printed in 1956, the year the third Ayres location on Dale Mabry opened, this order totaling $5.75 would cost – prior to tax and tip -- $44.88 in today’s dollars.
Posted by TBHC at 6:55 AM 4 comments: 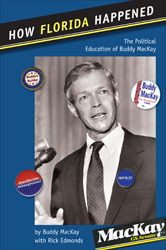 How Florida Happened, MacKay's first book, chronicles his time as an officeholder in the Florida Legislature, the United States Congress, and in Florida’s executive branch. His keen eye for the ironies and absurdities of politics as well as his brutal honesty come through in this memoir.

MacKay received the Democratic nomination for the United States Senate in 1988, only to lose to his Republication opponent by less than one percentage point. He convinced his political ally and friend Lawton Chiles to run for governor in 1990 and served as Chiles’ Lt. Governor for eight years.

MacKay will recount his three decades of public life in Florida, a time which saw Florida grow from semi-rural to a mega-state, where political dominance shifted from the left to the right.
Co-sponsored by the USF Libraries Florida Studies Center and supported by WUSF Public Media, Florida Conversations features authors and presenters covering a variety of Florida topics, from politics to fiction, history to environmental issues.

Florida Conversations is free and open to the public. Public parking is available at the Channelside garage and other city-owned lots. For more information, contact the Tampa Bay History Center at 228-0097 or visit us online.
Posted by TBHC at 6:56 AM No comments:

Kids can spend their day off from school unearthing a Timucuan kitchen mound like a true archaeologist and learning about the special meal shared between Spanish explorers and Florida’s first people. You’ll never look at Turkey Day the same way!

Presented by the Tampa Bay History Center and the Florida Public Archaeology Network, The First Real Thanksgiving is part of Discovery Days and open to children in 3rd through 5th grades. Registration is $30 per child for History Center members and $35 for non- members. Early drop-off and extended pick-up is available for an additional charge. Space is limited, pre-registration is required.

In 1969, the Florida Gators and University of Tampa Spartans shared Tampa Stadium on the same day in an event dubbed "Super Saturday." It proved to be such a success that event organizers did it again in 1970, this time bringing in the Kentucky Wildcats and Idaho State Bengals for competition.

To read more, check out the Tampa Sports History blog, or the November 12 print edition of La Gaceta newspaper.
Posted by TBHC at 6:23 AM No comments:

The Tampa Bay History Center continues its preschoolers’ program, A Little History, on Monday, Nov. 15 from 10:30 to 11:30 a.m. with Big Movers: Planes, Trains and Ships.

See how many “Big Movers” you can spot in our galleries and get a glimpse of a real cruise ship from just a few feet away. Check out our new train exhibition and enjoy games, songs and crafts.

A Little History is open to children ages 3 to 5 with an adult companion. Programs are held one weekday per month from 10:30 -11:30 a.m. Each program is $10 per child and $6 per adult. Members of the History Center receive a $2 discount for both children and adults. Gallery admission is included. One adult must accompany every two children. Space is limited, pre-registration is required.

For more information contact the History Center’s Assistant Curator of Education, Jennifer Tyson, at (813) 675-8960 or send her an email.
Posted by TBHC at 2:17 PM 1 comment:

Email ThisBlogThis!Share to TwitterShare to FacebookShare to Pinterest
Labels: A Little History

Minus the biggest names in women's tennis -- Martina Navratilova, Chris Evert Lloyd, Steffi Graf, Hana Mandlikova, and Pam Shriver -- organizers of the Florida Federal Tennis Open in Largo had to rely on up-and-coming young talent to provide an entertaining tournament. Some of the best young players on the women's tour did that and more during a memorable week at the Bardmoor Country Club.

To read more, check out the Tampa Sports History blog, or the November 5 print edition of La Gaceta newspaper.
Posted by TBHC at 6:23 AM No comments:

To read more, check out the Tampa Sports History blog, or the October 29 print edition of La Gaceta newspaper.
Posted by TBHC at 7:39 AM No comments: