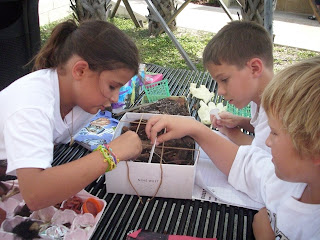 Become a junior archaeologist! Experts from FPAN (Florida Public Archaeology Network) help you uncover what life was like for Florida’ first people! Make pottery, use pre-historic tools, and start your own Indian mound. Complete the adventure with wet n’ wild excitement  in our park and play fountains.

Children ages 7 – 11 will work with experts during the week-long camp, where they’ll explore the History Center’s galleries, make pottery, study paleo-indian hunting tools, and participate in outdoor activities as they learn about a time when giant sloths and saber-toothed tigers roamed free.


Space for the History Center’s spring break camp is limited and pre-registration is required. Cost is $175 for the week. Members of the History Center receive a $25 discount. Classes run from 9 a.m.-4 p.m. Monday-Friday, with extended care available for an additional fee.


For more information or to register, contact the Tampa Bay History Center Education Department at
813-675-8960 or jtyson@tampabayhistorycenter.org.
Posted by TBHC at 1:07 PM 1 comment: 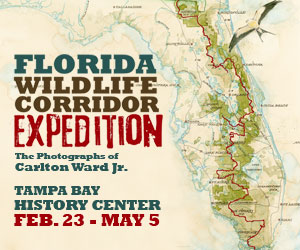 By foot, kayak, and horseback, the expedition team journeyed north from Everglades National Park, through the Big Cypress National Preserve, up the Kissimmee River to the Lake Wales Ridge, through the Ocala National Forest, and, finally, to the Okefenokee National Wildlife Refuge in southern Georgia.


Exhibition
The ambitious trek ― the Florida Wildlife Corridor Expedition ― is the focus of a new exhibition opening Saturday, February 23 at the Tampa Bay History Center. Florida Wildlife Corridor Expedition: The Photographs of Carlton Ward Jr. will take visitors on a virtual expedition from the Everglades to the Okefenokee. The exhibition will feature a collection of large-format images taken by Ward, along with maps, video footage, audio clips, news reports, and equipment used by team members during the expedition.


The exhibit will also look at similar explorations undertaken by earlier explorers and naturalists William Bartram and Mark Catesby, both of whom traveled through Florida’s interior in the 1700s.


Ward is an eighth-generation Floridian whose photographs have appeared in such publications as Audubon, Smithsonian, Nature Conservancy and National Wildlife. His 2009 photo book, Florida Cowboys, won a silver medal in the Florida Book Awards, and Popular Photography Magazine featured him as one of three photographers working to save vanishing America.

Florida Wildlife Expedition: The Photographs of Carlton Ward Jr., is on exhibit at the Tampa Bay History Center through May 5, and is sponsored by The Mosaic Company, The Kimmins Family Foundation, WUSF Public Media, and the Tampa Bay Times.


Documentary
The History Center will also host the premiere of Elam Stoltzfus’ PBS documentary chronicling the expedition. Florida Wildlife Corridor Expedition: Everglades to Okefenokee will debut in Cotanchobee Park in front of the History Center on Sunday, March 3 at 6:30 p.m. before it airs on public television stations across the nation later this spring. The History Center will offer extended gallery hours until 6:30 p.m., along with family-friendly activities in Cotanchobee Park beginning at 4:30 p.m. The screening is free and open to the public.

Burgert Brothers Exhibit Looks at Hillsborough County Then and Now


The black and white landscapes that populate the Burgert Brothers Photographic Collection are simultaneously familiar and foreign. As the pre-eminent commercial photographers in Tampa during the first half of 20th century, the Burgert Brothers Studio recorded the development of modern Hillsborough County one street corner and storefront at a time. The result is a collection of almost-familiar images ― downtown Tampa bustling with pedestrians, for example ― that are barely recognizable to contemporary viewers.

Comparing and contrasting the old with the new is what makes these photographs so compelling. In the History Center’s latest exhibition, The Big Picture: A Selection of Cirkut Photographs from the Burgert Brothers Collection, we see revelers gathered in suits and ties to enjoy Gasparilla, and swimmers enjoying Sulphur Springs, but few people are able to equate the framed images before them with their own personal experiences. If you didn’t visit downtown Tampa in the 1920s, for example, your mind immediately begins to assemble the modern pieces that are missing from the static black and white image of Franklin and Cass streets in 1928. You almost recognize it, but not quite.

The Burgert Brothers Studio snapped more than 80,000 photographs for its clients between the late 1880s and the 1960s. The photographs appeared in national publications, including Life and National Geographic magazines, as well as local newspapers, advertisements, promotional brochures, and displays for offices and stores. After the studio closed, its photographs and negatives were stored in a South Tampa garage, where heat and humidity destroyed many of the negatives. In 1974, the Friends of the Libraryof Tampa-Hillsborough County, recognizing the significance of the collection, purchased approximately 15,000 of the negatives so that the photographs would be available to the public.

Thanks to the availability of inexpensive reprints, many of the Burgert photographs are nearly ubiquitous. They adorn the walls of cafes and restaurants, doctor’s offices, and law firms across the Tampa Bay area. Many are familiar scenes: Gasparilla, Bayshore Boulevard or Ybor’s 7th Avenue. But this only scratches the surface of the collection.

Introduced by Kodak in the early 1900s, cirkut cameras enabled production of panoramic photographs up to 4 feet wide by 1 foot high. These large format rotational panorama cameras are capable of photographing a 360-degree view. The Burgert Brothers Studio was the largest commercial studio in Tampa with this type of camera.
﻿
﻿
﻿ ﻿

Cirkut cameras were originally built for photographing large groups such as conventions, graduating classes, and other public gatherings. Commercial photographers, like Al and Jean Burgert, quickly discovered a demand for panoramic views of landscapes such as railroads or real estate developments, farming and mining properties, manufacturing plants, and waterfronts and business districts of cities.

﻿Two prints from the mid-1920s exemplify the near-familiar feel of the Burgert’s cirkut photographs. It’s startling to contrast the aerial view of Ybor City in 1926 ― hundreds of houses packed tightly together, almost on top of each other ― with the sparseness of today’s Ybor, its remaining wood-framed bungalows siting solitarily among dozens of empty lots. Then, there’s the image from just one year earlier, 1925, of a nascent Davis Islands literally rising from the waters of Hillsborough Bay. Knowing what would become of these two neighborhoods over the next 80 years is what makes viewing these images so engrossing − and so fun.


The exhibition also includes a slideshow of 80 “re-photographs” by local photographer Bryan Weinstein. A civil engineer by trade with a passion for history and photography, Weinstein was drawn to the Burgert Brothers collection, enamored with the historic architecture depicted throughout the collection, and unsettled by photographs of beautiful buildings that have long since succumbed to the wrecking ball.

The Big Picture: A Selection of Cirkut Photographs from the Burgert Brothers Collection is on exhibit now through July 15 in the History Center’s Touchton Map Gallery.
Posted by TBHC at 12:06 PM No comments: