Just like a newborn baby, the artifacts in our Collections require a lot of supplies to keep them happy and healthy. Now is your chance to provide a little TLC to our artifacts by attending our Collections Shower.

You will have the opportunity to purchase archival supplies from our registry to help us with much needed items and learn about our Adopt an Artifact program.

Our featured speaker is Hitoshi Kimura from Art Conservation of Central Florida. Kimura will discuss ways to conserve your personal and family treasures such as photos, paintings, letters and other heirlooms.

The Collections Shower is $5 for History Center members and $10 for non-members.  Space is limited and pre-registration is required. To RSVP, call a Visitor Services representative at 813.228.0097 x. 0.

Why do they call it that? St. Petersburg, Florida

Email ThisBlogThis!Share to TwitterShare to FacebookShare to Pinterest
Labels: St. Petersburg, Why do they call it that?

See the Unseen at the Tampa Bay History Center 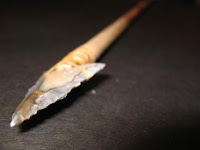 From to the , shell mounds left by 's Pre-Columbian peoples dot the landscape. Other evidence is harder to find. When did native people arrive? How long did they live in ? What tools did they use to hunt and fish?


Find the answers to these questions and more when the History Center and USF's Osher Lifelong Learning Institute present See the Unseen, a new four-week course on Florida archeology beginning April 6th.


Led by USF faculty member and West Central Director of the Florida Public Archaeology Network, Jeff Moates, the class will review 's native peoples and how archeologists study them.

The Florida Conversations Lecture Series continues with historian Tracy Jean Revels, author of Grander in Her Daughters: Florida's Women in the Civil War, on Sunday, March 27th at 3:00 p.m.
In Grander in Her Daughters, Revels recounts the experiences of ’s wives and widows, Unionists and secessionists, black female slaves, business owners and refugees during the Civil War.
Though the women of suffered Civil War traumas and privations commensurate with women throughout the Confederacy, few of their experiences have become part of the historical record. Revels rescues from neglect these women and the challenges they faced.
Co-sponsored by the and supported by WUSF Public Media, Florida Conversations features authors and presenters covering a variety of topics, from politics to fiction, history to environmental issues.
Florida Conversations is free and open to the public. Public parking is available at St. Pete Times Forum East Lot, the Channelside garage and other city-owned lots. For more information, contact the at (813) 228-0097 or online at www.tampabayhistorycenter.org.
Posted by TBHC at 10:00 AM No comments:

﻿ Want to dig deeper into history? Want to debate the importance of ’s environmental regulations or delve into women’s roles during the Civil War? Then the History Center Book Group is for you.
Each month, the Book Group convenes for engaging discussions on a variety of Florida-themed books. Topics range from politics to history, fiction to environmental issues, and titles often follow those selected for Florida Conversations.
These informal meetings are held the 3rd Thursday of the month from 10:30 to 11:30 a.m. in the ’s
Publix Supermarkets Classroom on the 2nd floor and
are free and open to the public.
Book Group Schedule:
March 17         Grander in Her Daughters: ’s Women During the Civil War by Tracy Jean Revels
April 21            Manatee Insanity: The War over ’s Most Famous Endangered
Species by Craig Pittman
May 19            A Land Remembered by Patrick Smith
June 16            “: A Target-Rich Environment for Writers” with Tim Dorsey
July 21            Hammock Reading: Reviews of several books for light summer reading
Book Group Members receive a 20% discount on book group selections purchased from the Museum Store. For more information about the Book Group, visit www.tampabayhistorycenter.org/bookgroup or call (813) 675- 8971.
Posted by TBHC at 9:00 AM 1 comment:

Dig, dance and paint your way through ’s past during the ’s History Adventure Camps beginning June 27th.

Uncover long-lost artifacts during Archaeology Adventures, brush up on your flamenco moves and practice your Spanish with Viva Tampa, and paint your masterpiece during Art Infusion. Designed for children ages 8 to 11, each week-long History Adventure Camp gives kids a unique opportunity to have fun while learning about ’s history.
Summer :
June 27 - July1        Archaeology Adventures
Dig in to ’s past to a time when giant sloths and saber toothed tigers roamed free! Get your hands dirty as real archaeologists show how to study artifacts and discover what life was like for ’s first people.
July 11-15                 Let’s Play
It’s all fun and games this week! Play games and sports that kids played in the past and create your own Museum Olympics. Get wet and cool off during fountain games at our waterfront park.
July 25-29                 Art Infusion
Paint, draw, and sculpt your way through the past! Fill your brush with coffee “ink” and show the world how you see . Your masterpieces will even hang in our gallery!
August 8-12             Viva !
Habla Espanol? Learn to speak Spanish as you make a Tampa-style Cuban sandwich or pick up some Latin dance moves! Celebrate the food, music, and festivals of ’s rich cultures.
Each week-long camp is $150 for non-members/ $135 for TBHC members. Campers can register for each individually or sign up for all four. Camps begin at 9:00 a.m. and run until 4:00 p.m. Extended care is available for an additional fee. Pre-registration is required. For more information and to register, email Jennifer Tyson or, call (813) 675-8960.
Posted by TBHC at 7:23 AM No comments:

This summer, the Tampa Bay Rowdies returned to play as members of the U.S. Soccer Federation Division-2 Pro League. The original Rowdies – founded in 1975 and dissolved in 1993 – were the first local sports team to win a professional championship, defeating the Portland Timbers 2-0 to capture the 1975 Soccer Bowl title.

Mike Connell, an original member of the Rowdies, recently donated and loaned to the hundreds of artifacts from his playing career. Connell joined the squad as an 18-year-old from in 1975, and played his entire career as a Tampa Bay Rowdie before retiring in 1984. Nicknamed “Iron Mike,” he is widely regarded as one of the most popular players in franchise history.
The accompanying photograph highlights a few of the items from his collection:
n      Commemorative Pepsi-Cola bottle honoring the 1975 NASL Champion Tampa Bay Rowdies
n      “Kick” game program from NASL Quarter-Final game at Tampa Stadium on August 13, 1975
n      Declaration issued by Tampa Mayor William F. Poe bestowing “Honorary Citizen” status to members of the 1975 Tampa Bay Rowdies
n      Official NASL game-used soccer ball
Posted by TBHC at 11:42 AM 1 comment: 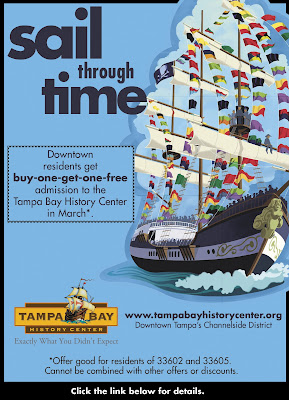 Live in Downtown Tampa? Now through March, residents of 33605 and 33602 will receive buy-one-get-one-free admission to the Tampa Bay History Center.

Our Neighborhood Appreciation Program will continue throughout the year as we offer special deals and discounts for neighborhoods throughout Hillsborough County.

Proof of downtown residency is required. Cannot be combined with other discounts, coupons or specials. Good through March 31, 2011.
Posted by TBHC at 1:02 PM 1 comment: 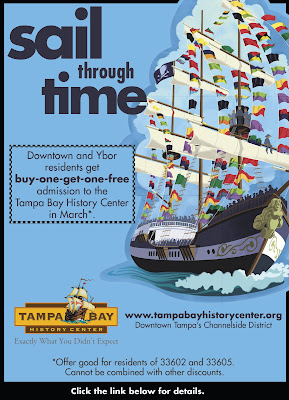 In the spirit of election day, we thought it fitting to recall John T. Lesley's post Civil War-effort to dissolve the City of Tampa, which voters overwhelmingly approved. Find out more about Tampa during the Civil War when you visit Blue and Grey in Tampa Bay, on exhibit at the History Center through May.
Loses Its Charter
﻿﻿ ﻿﻿ Following the end of the Civil War, ’s leaders attempted to return their shattered city to some level of normalcy.  Not surprisingly, Federal authorities had their own plans for bringing the South back into the .  The era that would come to be called Reconstruction was highlighted by the national government’s attempts to bring what they considered equality to the Southern states.  Those attempts were met with resistance and even open hostility throughout the South.
Though involved with ’s resurgence in the 1880s, John T. Lesley is perhaps best-known for his political actions during the initial post-war period.  In his return to civilian life following his time in the Confederate army and ’s Cow Cavalry, he played an instrumental role in how received the concept of Reconstruction.
’s Reconstruction legislature passed a law in 1869 calling for the reorganization of municipal governments.  Lesley and other former Confederates felt that this would lead to Republican and African American control of city hall.  In an effort to eliminate that threat, Lesley ran for mayor on the platform that if was elected he would abolish ’s city government.  He won in a landslide and, true to his word, he saw that the city’s charter lapsed, therefore ensuring that it would not fall into the hands of Carpetbaggers (Northerners) and Scalawags (Southerners aiding the Carpetbaggers).  would not become a city again until July 1887. -- RKP
Posted by TBHC at 9:18 AM No comments: