Florida Conversations Continues with "Florida and the Civil War"

The Tampa Bay History Center continues its Florida Conversations Lecture Series with “Florida and the Civil War”, a talk lead by Dr. Robert Taylor on Sunday, Jan. 30 at 3:00 p.m.

Dr. Taylor, a professor of Humanities and Communication at the Florida Institute of Technology, is the author of Rebel Store House: Florida's Contribution to the Confederacy and co-author of Florida in the Civil War.

Dr. Taylor's lecture will focus on Florida's role in the Civil War and will complement the History Center’s new temporary exhibition, Blue and Gray in Tampa Bay: The Civil War on Florida’s Gulf Coast.

Florida Conversations is free and open to the public. Public parking is available at the Channelside garage and other city-owned lots. For more information, contact the Tampa Bay History Center at 228-0097 or visit us online.
Posted by TBHC at 12:01 PM No comments:

The Tampa Bay Chapter of the U.S. Green Building Council and the Tampa Bay History Center are partnering to present Building Tampa’s Future, a mayoral candidate forum with a focus on development, sustainability and job creation. The forum will begin at 7:00 pm on Wednesday, Feb. 2. Doors open at 6:00pm.

“Tampa’s building and construction industry has been hurt by the economic downturn and it’s important for the public to understand how our incoming mayor will approach these issues, especially in Tampa’s urban core neighborhoods,” said USGBC Gulf Coast Chapter Executive Director Colleen Mackin.

Mackin chose the Tampa Bay History Center to host the Feb. 2nd debate because it is the first Hillsborough County-owned LEED certified building.

“We are in the final stages of our application and anticipate a silver rating,” said History Center President and CEO C.J. Roberts. “Plus, the History Center is a great backdrop to discuss Tampa’s past and future.”

The non-partisan candidate forum is free and open to the public. For more information, contact the Gulf Coast Chapter of the USGBC at colleen@usgbc-fgc.com, or call (727) 372- 3814.
Posted by TBHC at 8:20 AM 1 comment:

The course is presented in conjunction with the History Center’s newest exhibition, Blue and Gray in Tampa Bay: The Civil War on Florida’s Gulf Coast opening at the Tampa Bay History Center on Jan. 10.

Drawing on a wide range of experts, Selections, Collections and Conversations will hone in on Florida’s often-overlooked Civil War legacy. USF historian John Belohlavek will lead a tour of the History Center’s new exhibition while Jeff Moats of the Florida Public Archaeology Network will discuss his work uncovering Civil War-era shipwrecks along Florida’s Gulf Coast. The course will also touch on women’s roles during the War, the African American experience, and modern-day Civil War re-enactors.

Blue and Gray in Tampa Bay is on exhibit through June 2011 in the History Center’s Wayne Thomas Gallery. For more information about the exhibition and related programming, visit our website or call (813) 228-0097.
Posted by TBHC at 8:38 AM 1 comment:

Behind-the-Scenes Images from Blue and Gray in Tampa Bay: The Civil War on Florida's Gulf Coast 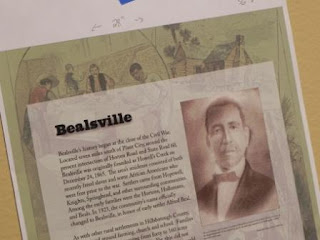 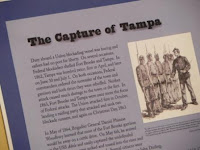 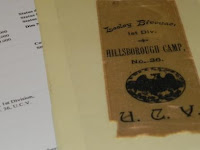 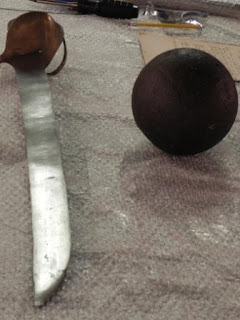 Children Live A Pirate’s Life at the History Center

Kids can get ready for Gasparilla when the Tampa Bay History Center presents A Pirate’s Life! on Wednesday, Jan. 12 from 10:30 to 11:30 a.m.

Part of the History Center’s preschoolers program A Little History, children will listen to sea chanteys while digging through a pirate’s treasure chest. To round out the revelry, they’ll create their own crafty treasures and participate in other age-appropriate games.

Plus, special guest author Brenda Darnley Martin will read from her underwater adventure book set in the waters of Tampa Bay, Freddie, Hector, and Tish: The Treasure Hunt Fish.

A Little History is open to children ages 3 to 5 with an adult companion. Cost is $10 per child and $6 per adult. Members of the History Center receive a $2 discount for both children and adults. Gallery admission is included. One adult must accompany every two children. Space is limited, pre-registration is required.
For more information contact the History Center’s Assistant Curator of Education, Jennifer Tyson, at (813) 675-8960 or click here to register.
Posted by TBHC at 11:06 AM No comments: 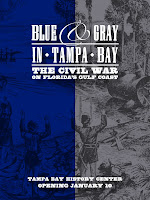 Call it Southern pride but, after the Union Navy launched a cannon ball into the living room of the Ferris home in 1862 - one of several bombardments of Tampa - the family never bothered to repair the hole.

Now, that cannon ball, along with Civil War-era maps, weaponry, photographs and reproduction uniforms will be on exhibit during Blue and Gray in Tampa Bay: The Civil War on Florida’s Gulf Coast opening at the Tampa Bay History Center on January 10th.

In Florida, the third state to secede from the Union in 1861, confrontations between Confederate and Union troops raged along the Gulf Coast. Learn about stealthy Confederate blockade runners and Florida’s “Cow Cavalry,” plus find out how the War Between the States affected Secessionists, Unionists, slaves and women in the Tampa Bay area. In addition, the History Center will feature the traveling exhibit Florida in the Civil War, on loan from the Orange County Regional History Center.

“The opening date of January 10th is significant,” said the History Center’s Saunders Foundation Curator of History, Rodney Kite-Powell. “Florida seceded from the Union exactly 150 years ago, on January 10, 1861.”


Blue and Gray in Tampa Bay will be on exhibit through April 2011 in the History Center’s third floor gallery.

Stay tuned to this blog for more Civil War stories and updates about programs and events related to the exhibit.

For more information about the exhibition and related programming, visit our website or call (813) 228-0097.
Posted by TBHC at 11:55 AM No comments:

Mark Champion, the current radio play-by-play announcer for the Detroit Pistons, is fondly-remembered locally as the radio voice of the Tampa Bay Buccaneers from 1979-1988. Since leaving Tampa in 1989, Champion has served in the same capacity for the Detroit Lions from 1989-2004, the Detroit Pistons from 1992-1996, then rejoined the Pistons in 2001. He recently took some time prior to a Pistons-Magic game in Orlando to reflect on his time in Tampa and the special relationship he formed with Buccaneer head coach John McKay.

To read more, check out the Tampa Sports History blog, or the December 31 print edition of La Gaceta newspaper.
Posted by TBHC at 8:57 AM No comments: