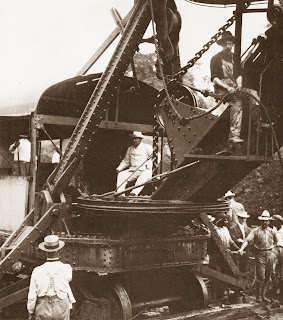 The story of one of the greatest engineering feats of the 20th century, the construction of the Panama Canal, comes to life as the Tampa Bay History Center welcomes Gerry DeTore of the Panama Canal Museum on Sunday, May 2nd, at 3:00 pm.

DeTore, whose father worked for the Panama Canal Company and relocated the family to the Canal Zone, will discuss the history of the Panama Canal and its historic links to Florida. For instance, in 1906, the United States Congress declared that Tampa be the first city to celebrate the building of the Panama Canal, requesting that President Theodore Roosevelt hold a naval review in the waters of Tampa Bay.

The 1906 Act stated, “by reason of its being further to the southward and nearer to said Canal than any other city in the country, having a deep and commodious harbor, reached by ample railroad facilities, as also on account of its salubrious climate and spirit of American progress among its citizens manifest in the rapid growth and development of the city and her commerce affords a suitable place for celebration of the work done in the construction of the Panama Canal.” The celebration was finally held in February 1910, marking what would become Gasparilla Festival.

DeTore’s talk will mark the opening of the Panama Canal Museum’s Community Case exhibit, located in the History Center’s second floor gallery. The exhibit features photographs of the Canal’s construction and other artifacts.