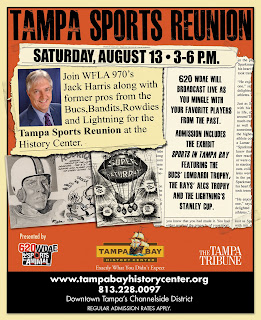 Remember when the Bucs wore orange, soccer was a “Kick in the Grass” and Steve Spurrier was head coach…of the Bandits? Relive Tampa Bay’s early sports glory during the Tampa Sports Reunion at the Tampa Bay History Center on Saturday, August 13 from 3-6 p.m.

Hosted by 970 WFLA’s Jack Harris, visitors can mingle with former pros from the Bucs, Bandits, Lighting and Rowdies as more than 30 former athletes will be on hand to sign autographs, take photographs and chat with museum patrons. Harris will be joined by announcers from 620 WDAE The Sports Animal broadcasting live from the History Center.

Tampa Sports Legends is part of Sports in Tampa Bay: Through the Eyes of Lamar Sparkman, currently on exhibit at the Tampa Bay History Center.

Best known as the creator of the Tampa Bay Buccaneers’ original swashbuckling logo, Lamar Sparkman’s drawings of professional and amateur athletes span more than 40 years. Those drawings, along with trophies and memorabilia from Tampa’s Bay’s professional, collegiate and amateur teams are on exhibit through September 12.

The Tampa Sports Reunion is presented by 620 WDAE The Sports Animal and sponsored by the Tampa Tribune. Regular admission rates apply. For more information, visit www.tampabayhistorycenter.org or call (813) 228-0097.

* Player appearances are not guaranteed. The History Center is not responsible for cancellations or players' personal schedules.
Posted by TBHC at 2:20 PM