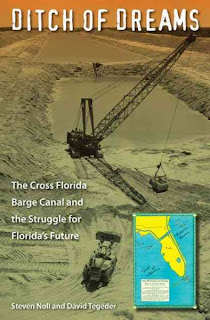 Before Walt Disney enchanted Central Florida and Cuban flair ignited Miami, the intricate bends of the Oklawaha River annually attracted thousands of tourists to the Sunshine State. However, in the wake of the Great Depression, the 1940s introduced a Federal Works Project which threatened to destroy the wild scenery that characterized North Florida’s natural waterways. In a state constantly conflicted by politics and environmentalism, the story of the Cross Florida Barge Canal characterizes the battle between “progress and preservation.”
Ditch of Dreams: The Cross Florida Barge Canal and Struggle for Florida’s Future, written by Dr. Steven Noll of the University of Florida and Dr. David Tegeder of Santa Fe College, boldly delves into the complexities of the Canal’s political and environmental struggle. After years of elaborate research, Ditch of Dreams reveals a story of environmental citizen advocacy which succeeded in halting the largest Public Works Project in the midst of construction. The history of the Cross Florida Barge Canal reaches beyond its extensive history, in many ways it illustrates Florida’s current political conflicts.
This month the Tampa Bay History Center will feature Ditch of Dreams: The Cross Florida Barge Canal and Struggle for Florida’s Future at the book group discussion on January 21, at 10:30am. Also, Dr. Steven Noll and Dr. David Tegeder will speak at the Tampa Bay History Center on Sunday, January 31, at 3:00 pm. as part of the Florida Conversation Lecture Series. Both events are free and open to the public.
Posted by TBHC at 7:17 AM